The Russian airline, Red Wings, has had their operations suspended by the Russian aviation agency after one of their aircraft crashed off the runway of a Moscow airport, killing several people. The airline is charged with failing to provide emergency simulator training to their pilots. Emergency flight simulator training provides pilots with interactive scenarios that provide training on all emergency warning systems and procedures. 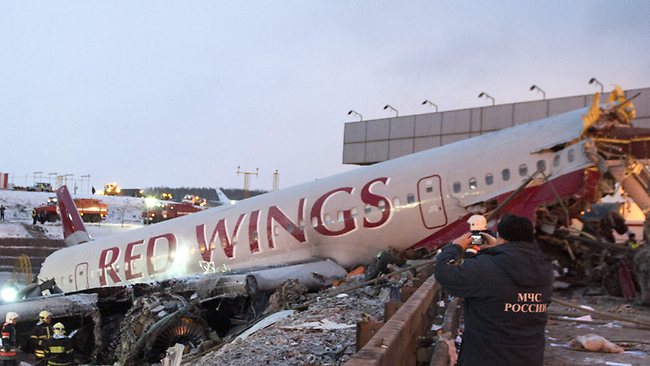 Rescuers work at the site where a Red Wings plane careered off the runway, killing several people.

“An enquiry has established that the crew did not undertake training on a flight simulator concerning warning systems about the approach of the ground and a collision.”

Media mogul and owner of the Russian airline,  Alexander Lebedv said on Twitter:

“Prosecutor Kekhlerov does not know that the simulators which exist in Russia do not simulate this situation. With (the federal air transport agency’s) permission we carried out the (pilot) training in the cockpit (of a plane).”

Lebedev is also facing charges of assault for an attack on a fellow Russian tycoon during a televised talk show, according to Channel NewsAsia article, Russian airline “failed to train pilots” of crashed plane. Watch a YouTube video of the ex-KGB agent, and current owner of Britain’s Independent newspaper, Alexander Lebedev punch a man during a televised debate on the financial crisis: