This interactive 3D assembly training simulator was developed by ForgeFX for Dynamic Defense Materials, and their portable armored wall system, McCurdy’s Armor™. This unique snap-together, LEGO™-like system is completely mobile and easy to deploy to the battlefield.

The interactive 3D assembly training simulator allows soldiers to prepare for the assembly of armor, a mission critical combat component, in a safe and risk-free virtual environment. The McCurdy’s Armor™ 3D training simulator allows soldiers to become experts at the building of these armored structures before they ever step foot onto a real-world battlefield. 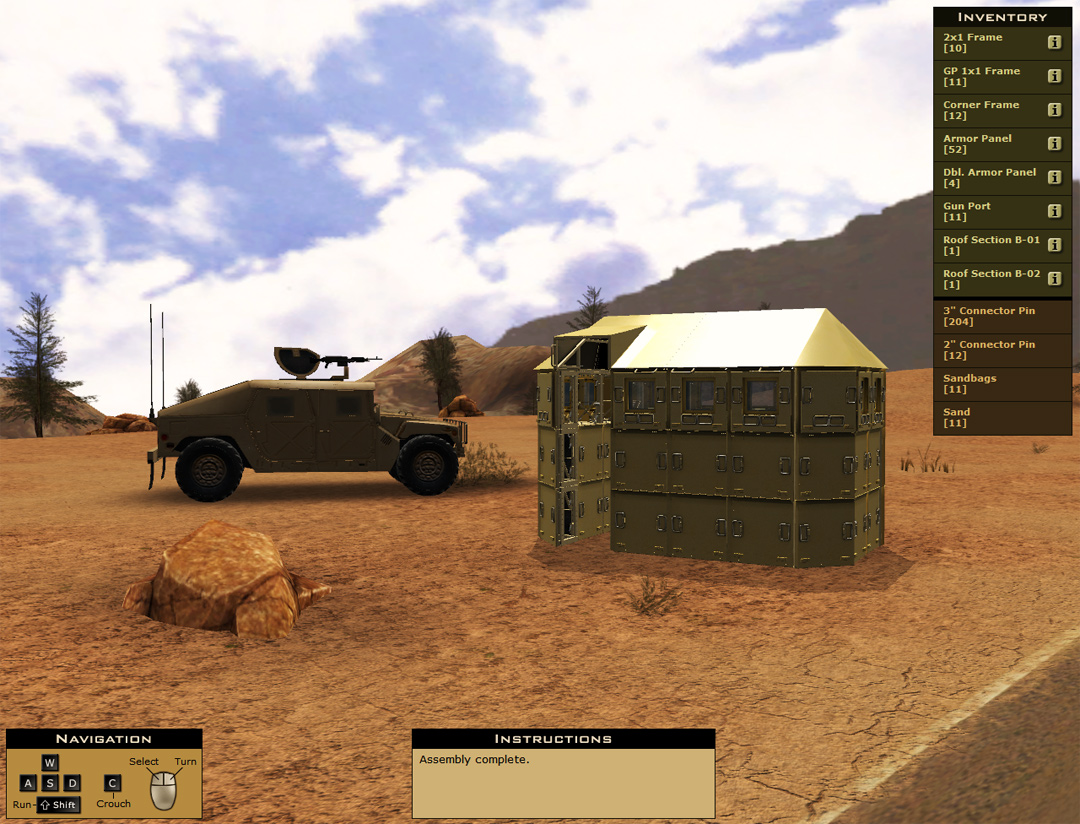 McCurdy’s Armor™ systems are in use today in many countries are the world, including the U.S., Iraq, Afghanistan, Jordan, Abu Dhabi, and Mexico. With proper training an essential requirement, DDM partnered with ForgeFX to develop this interactive 3D simulator that trains military personnel how to assemble the armor system rapidly. Military training simulators help keep soldiers well-trained and safe all around the world. 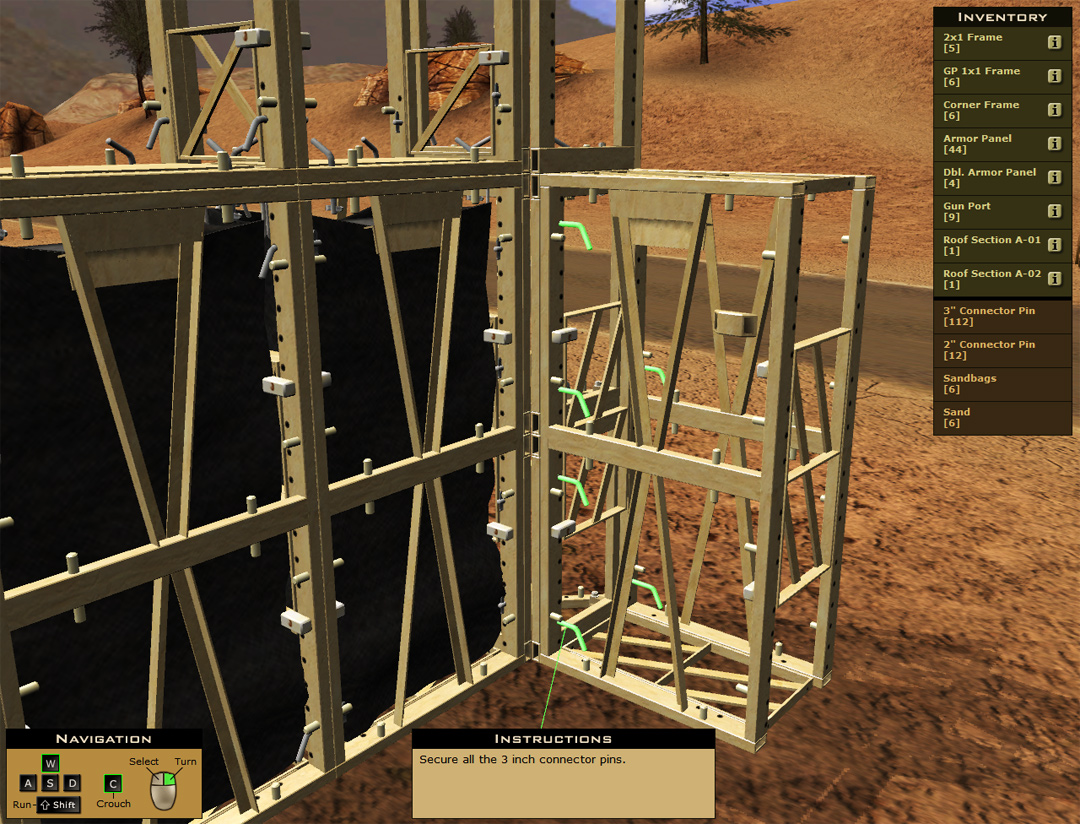 The McCurdy’s Armor Assembly Trainer is a custom developed real-time 3D simulation software package that provides virtual hands-on training and instruction on the configuring of walls and enclosures. The program is a downloadable Windows-based desktop application, developed with the Microsoft XNA Framework. XNA is the programming environment and set of managed libraries, based on the Microsoft.NET Framework, that allows developers to use Visual Studio to create games that run on Windows-based computers, as well as the Xbox 360 console and Windows Phone. Users can freely navigate the virtual 3D environment where they can build armored wall and structure configurations. Complete with a tutorial that teaches operators how the use the training simulator, the application allows users to closely examine the details of each assembly step, or watch the structure auto-assemble in fast-forward. 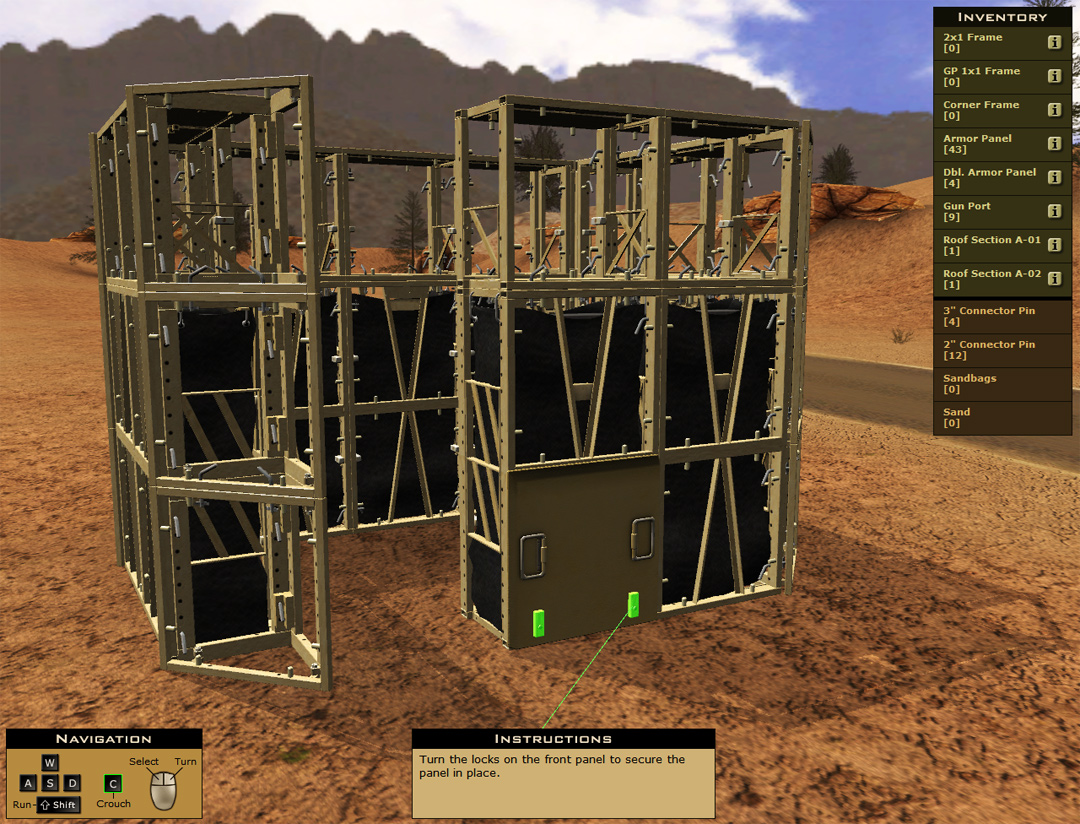 Armor panels are held in place by twisting a lock handle on the outside of the armor, which engages an internal locking bar. Armor panels are equipped with lift handles welded into place. This interactive 3D simulation allows soldiers to become familiar with the multiple parts that are required for each structure, and how they attach to each other, so that they can perform their jobs faster, safer, and more efficiently on the battlefield, where every second counts. 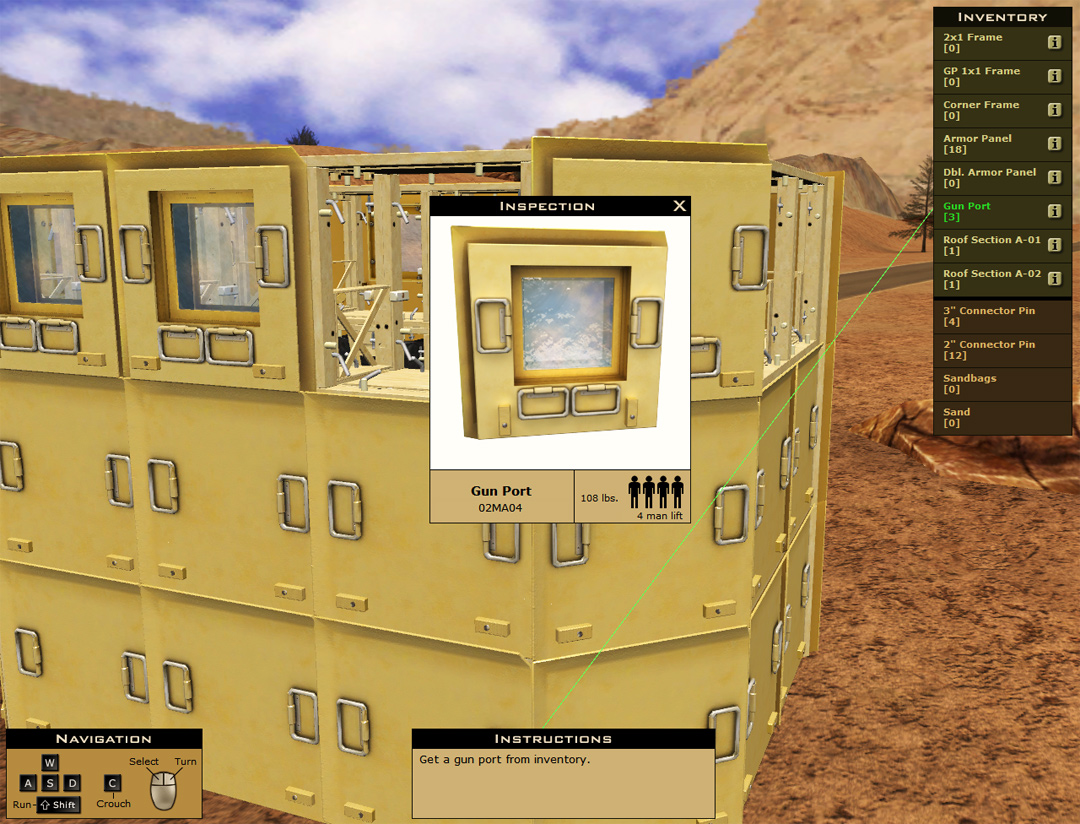 McCurdy’s Armor™ is named in honor of fallen Marine Lance Corporal Ryan McCurdy, killed in action in Fallujah, Iraq on January 5th, 2006. Lance Corporal Ryan McCurdy who served in Fallujah with DDM’s Product Specialist Joe Dimond, was a true hero who lost his life while pulling wounded Corporal Clifton Trotter to safety. DDM believes that if Ryan had a product like their portable armored wall system, he would have survived the attack that took his life that day. ForgeFX is proud to partner with Dynamic Defense Materials on the development of this military equipment simulator, and hopes that the training it provides helps get soldiers out of harm’s way faster. 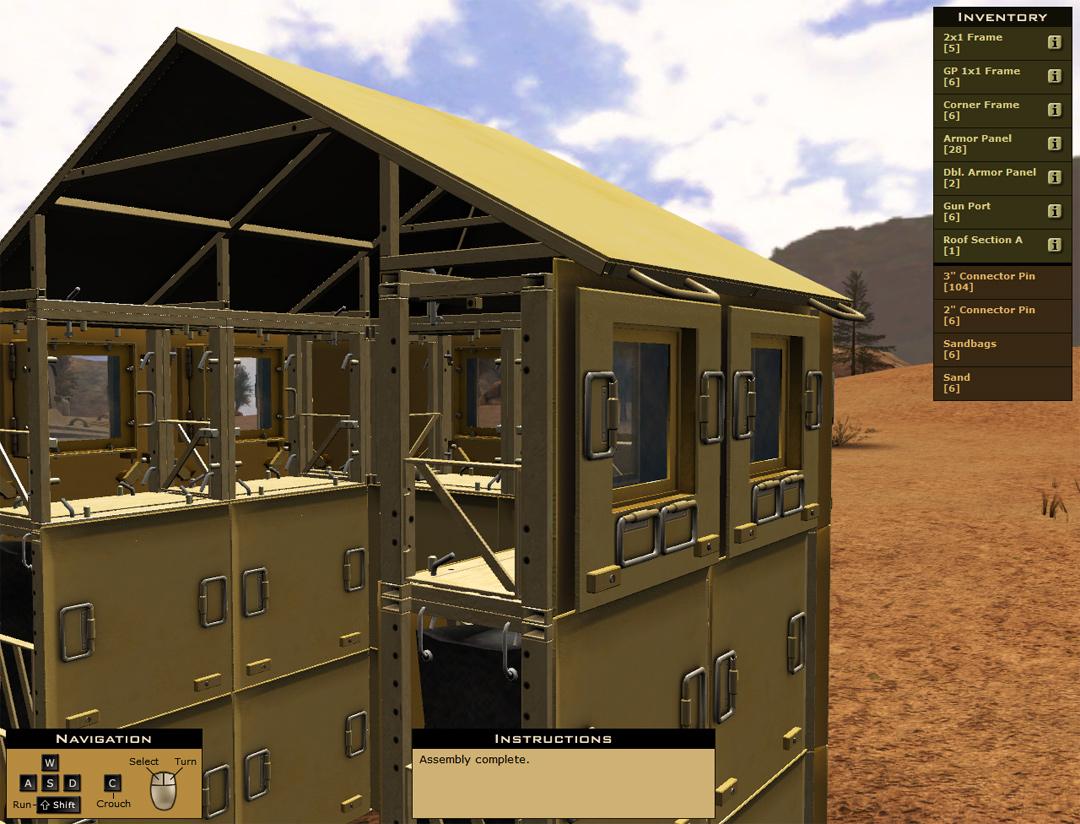 The McCurdy’s Armor™ Assembly Trainer provides a virtual environment which allows soldiers to directly experience, practice, and master, the guard post assembly process. Users can navigate the real-time 3D virtual environment by using common video game controls, this allows operators to build structures and inspect them by walking around, crouching down, zooming in, etc. Starting off with a frame in its collapsed position users pull back on the latch to unfold the frame. With the frame unfolded, the two side gates can be opened, and locked into place with the four gate toggles. Step-by-step, soldiers become participants in the construction of different types of structures, directly experiencing how the armor system works, and taking that muscle memory with them into the real-world. 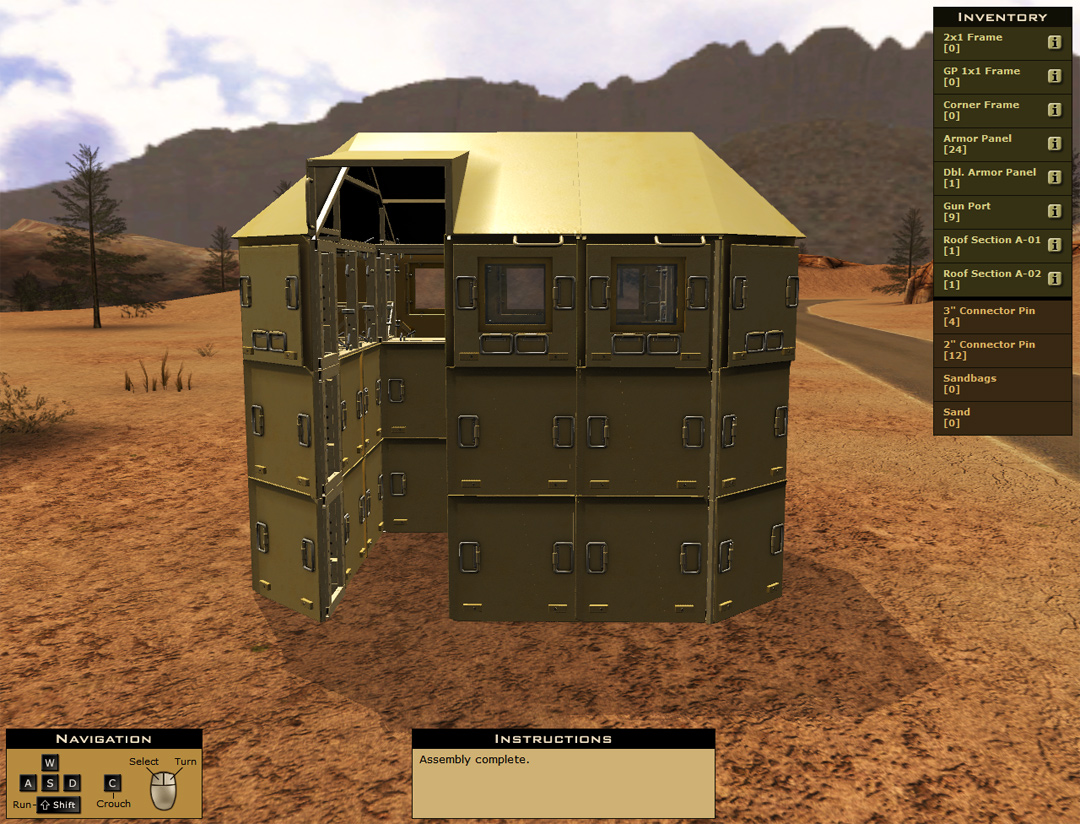 A collection of screenshots and images of the McCurdy’s Armor virtual assembly instructor. 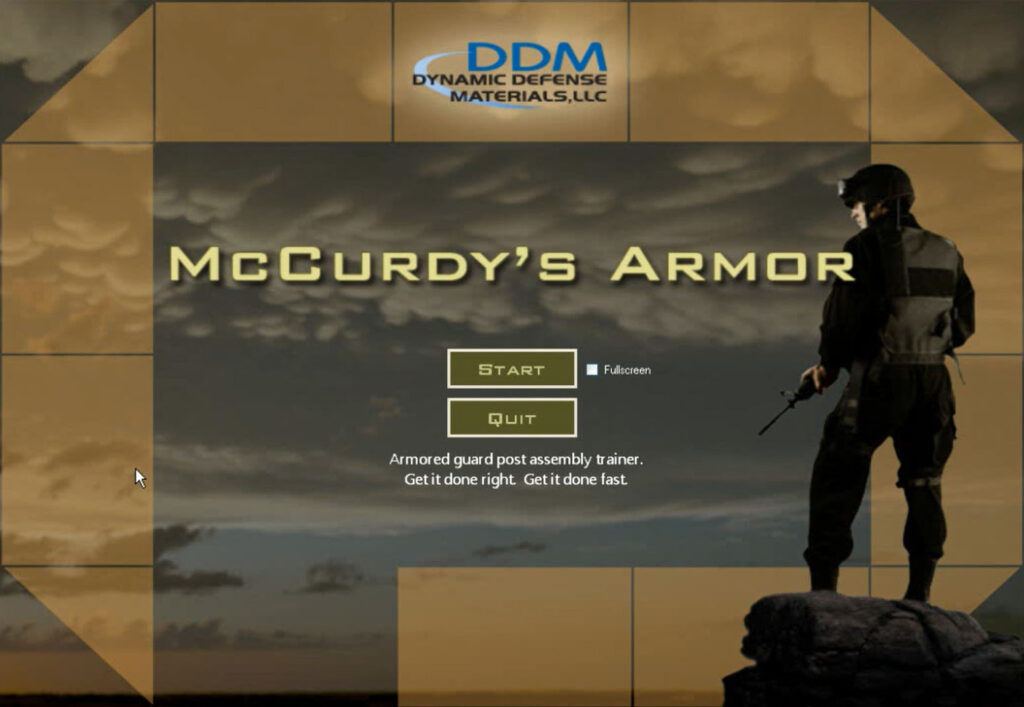 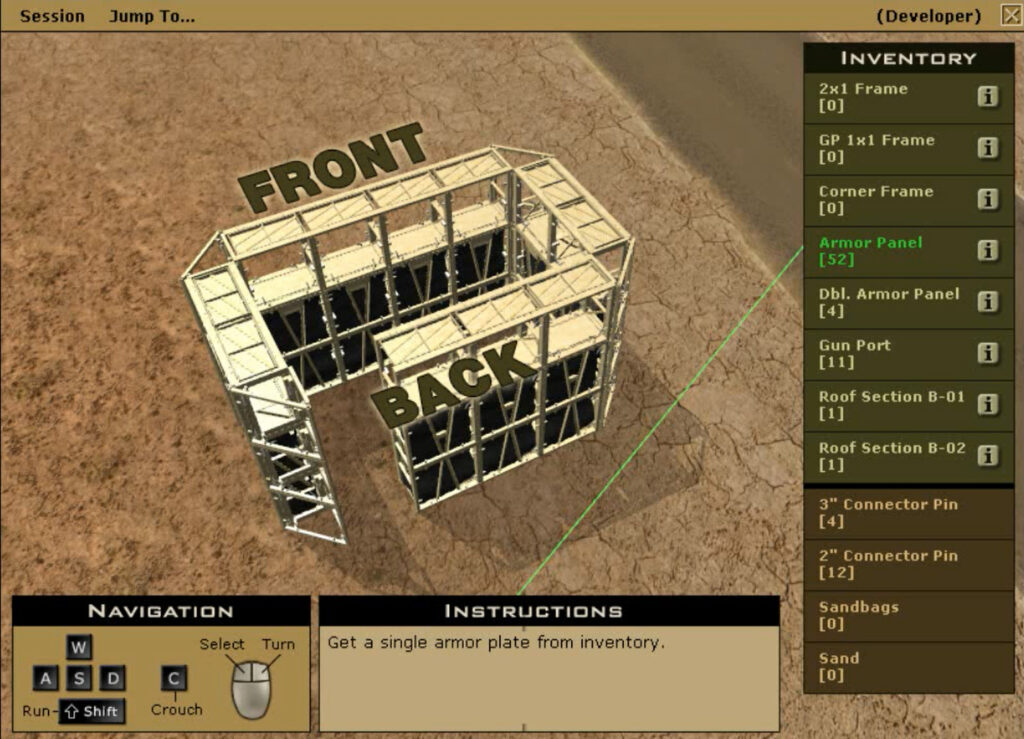 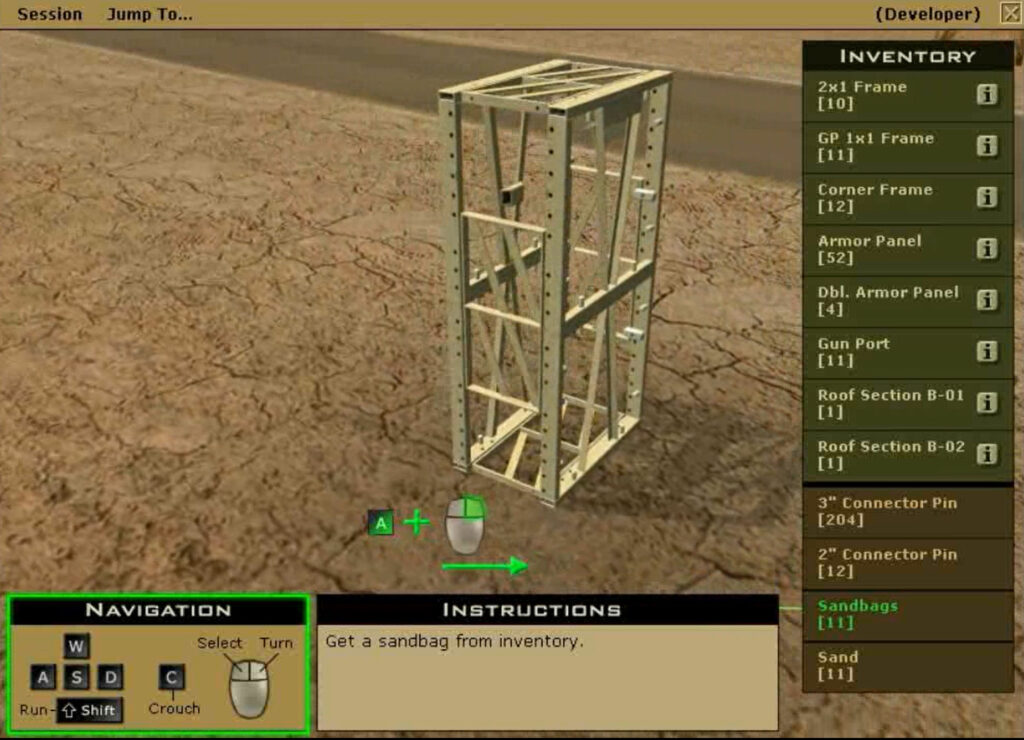 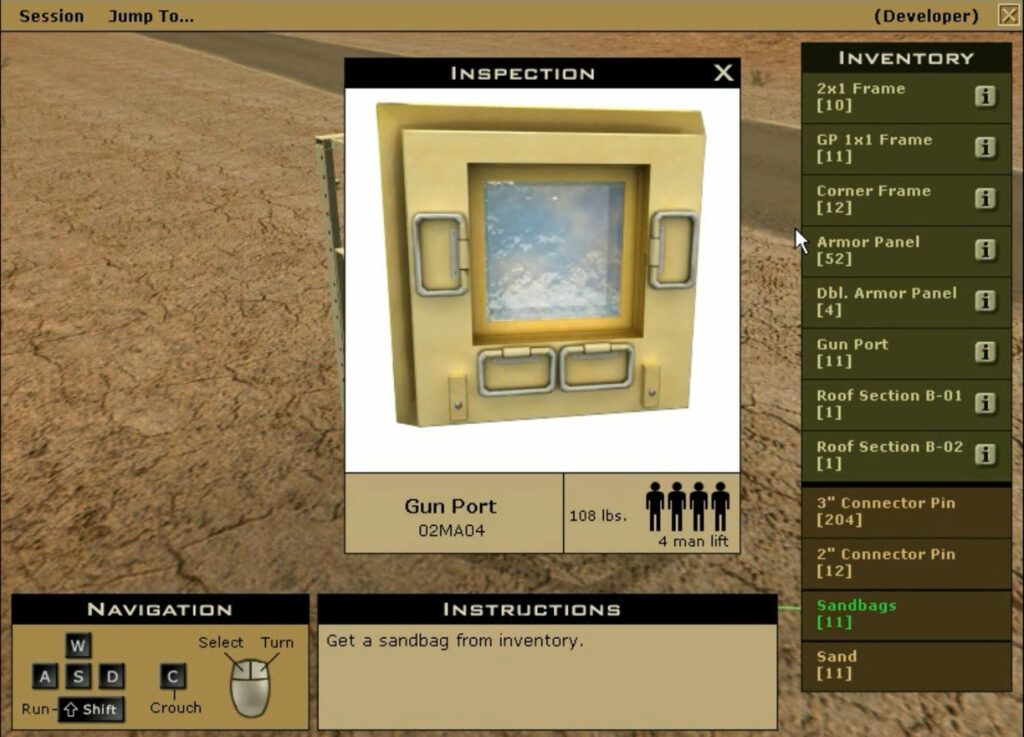 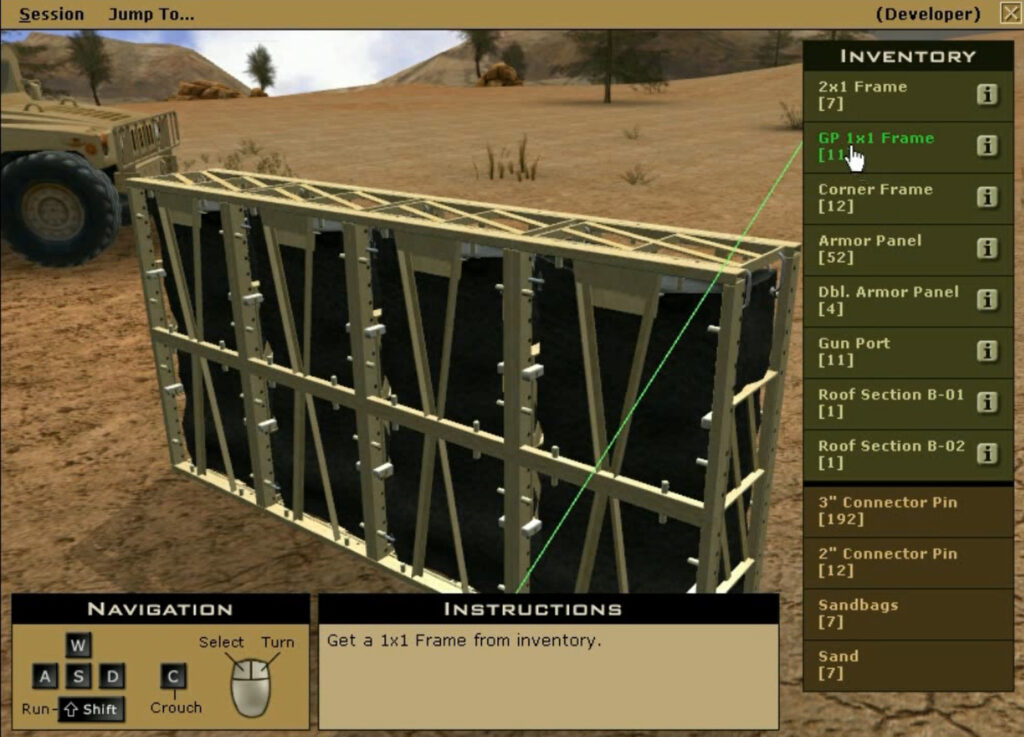 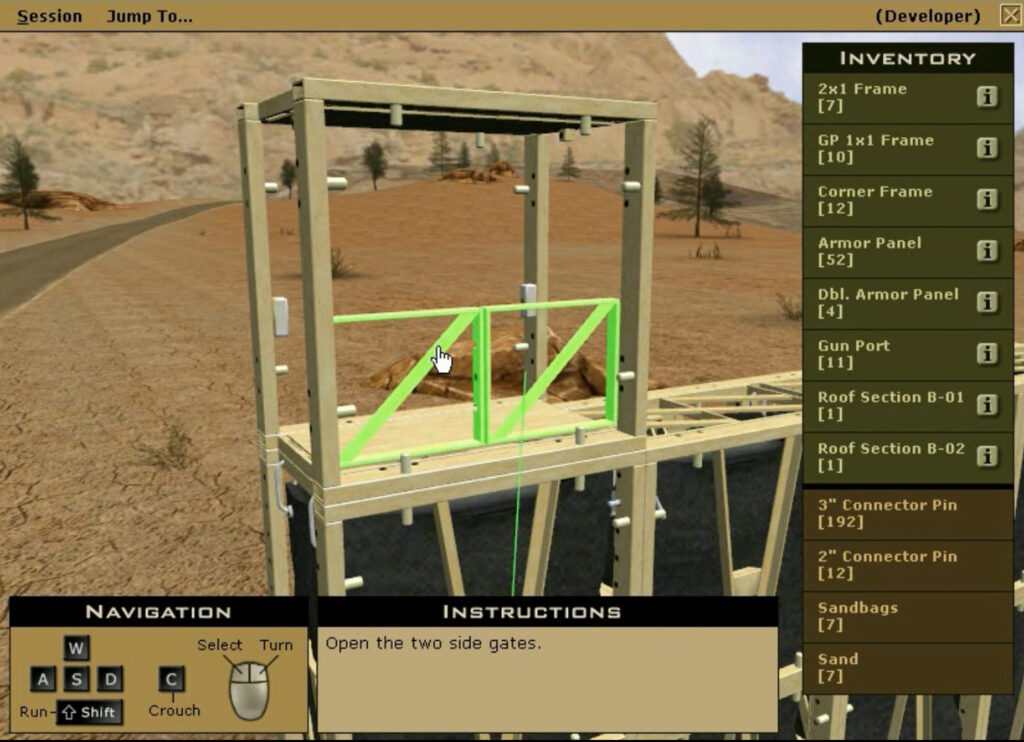 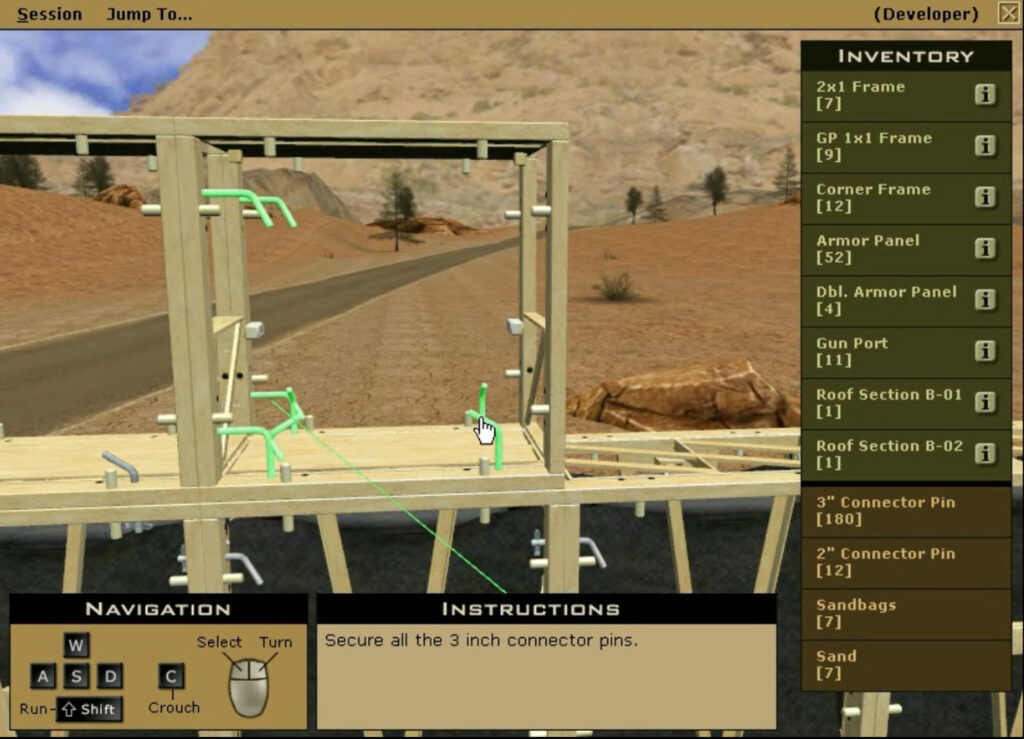 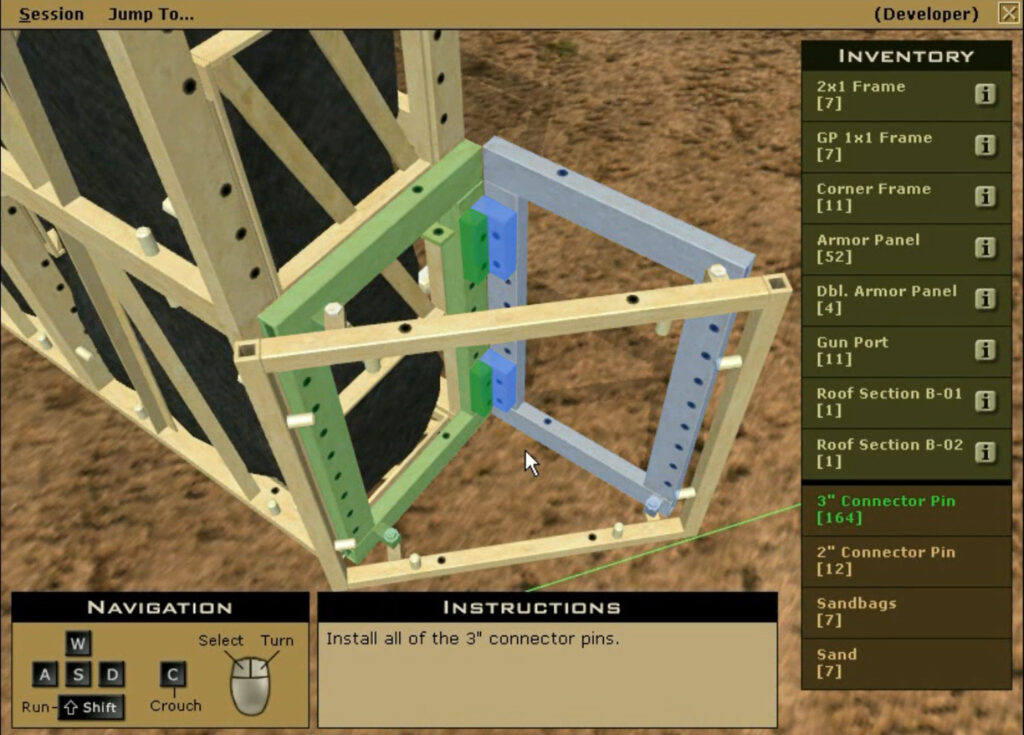 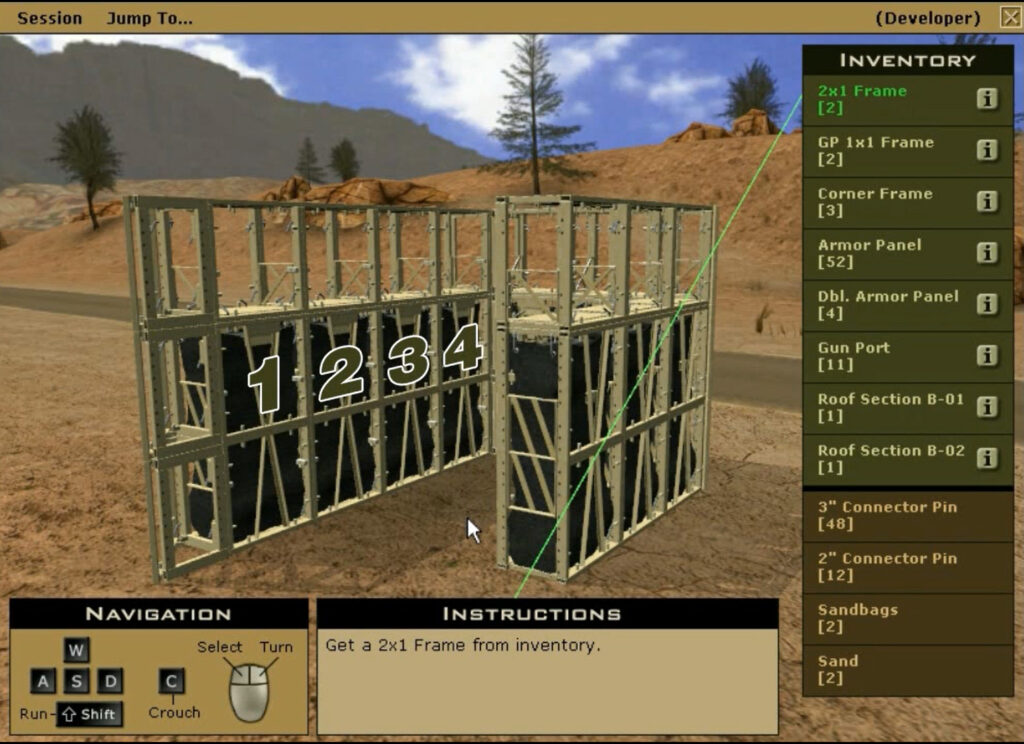 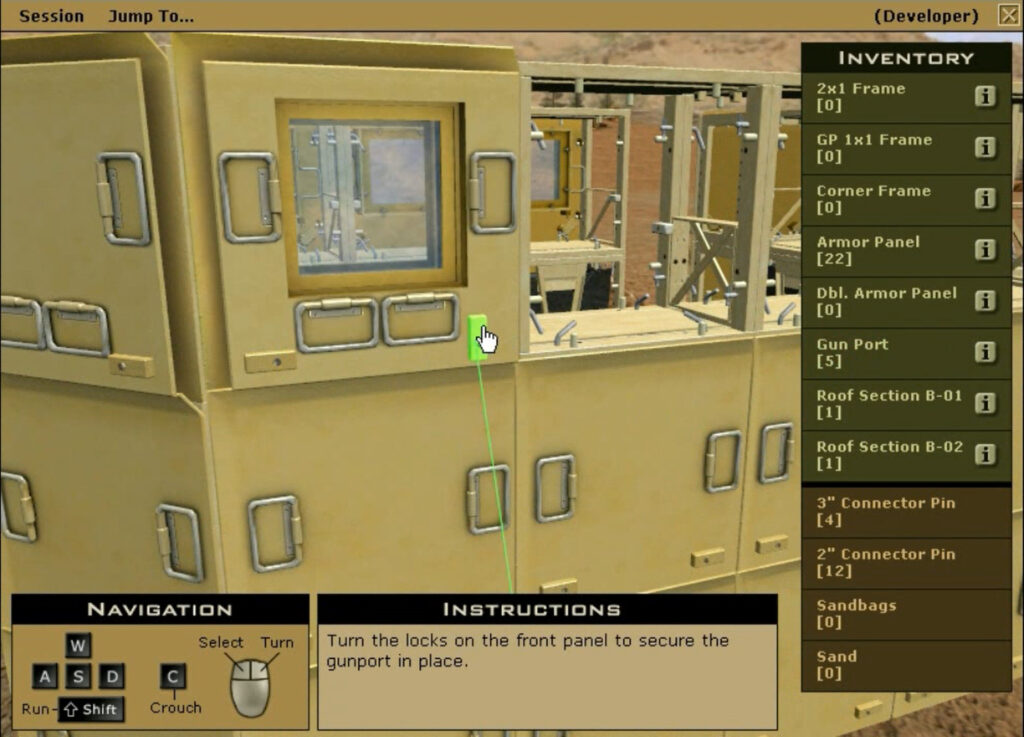 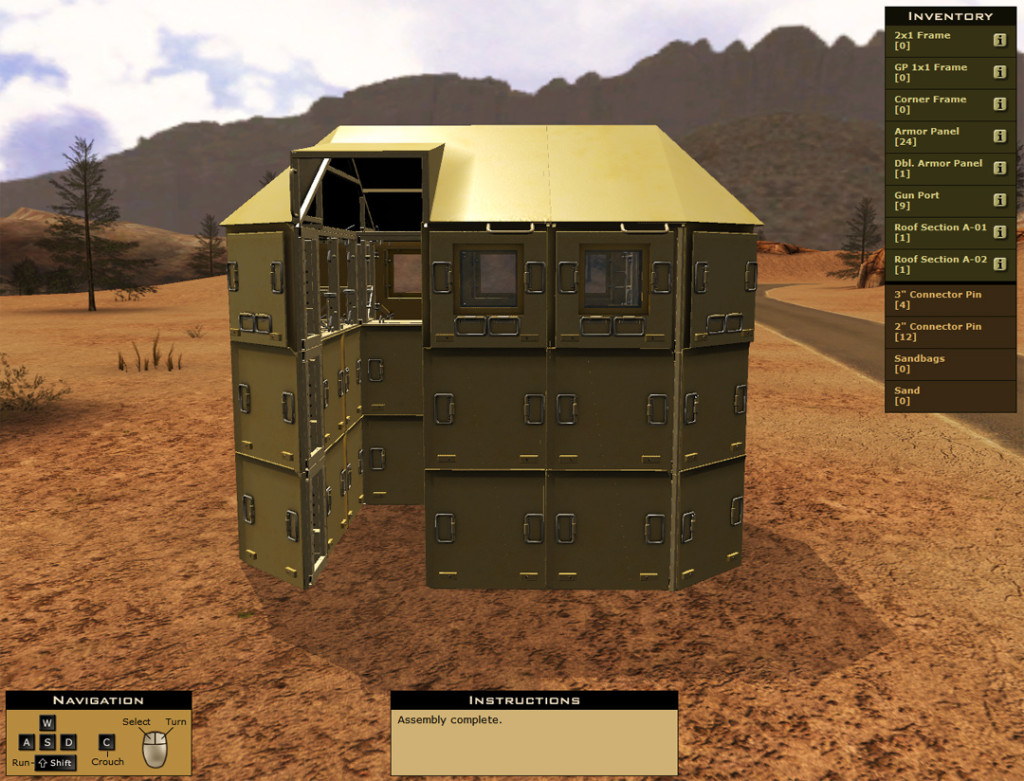 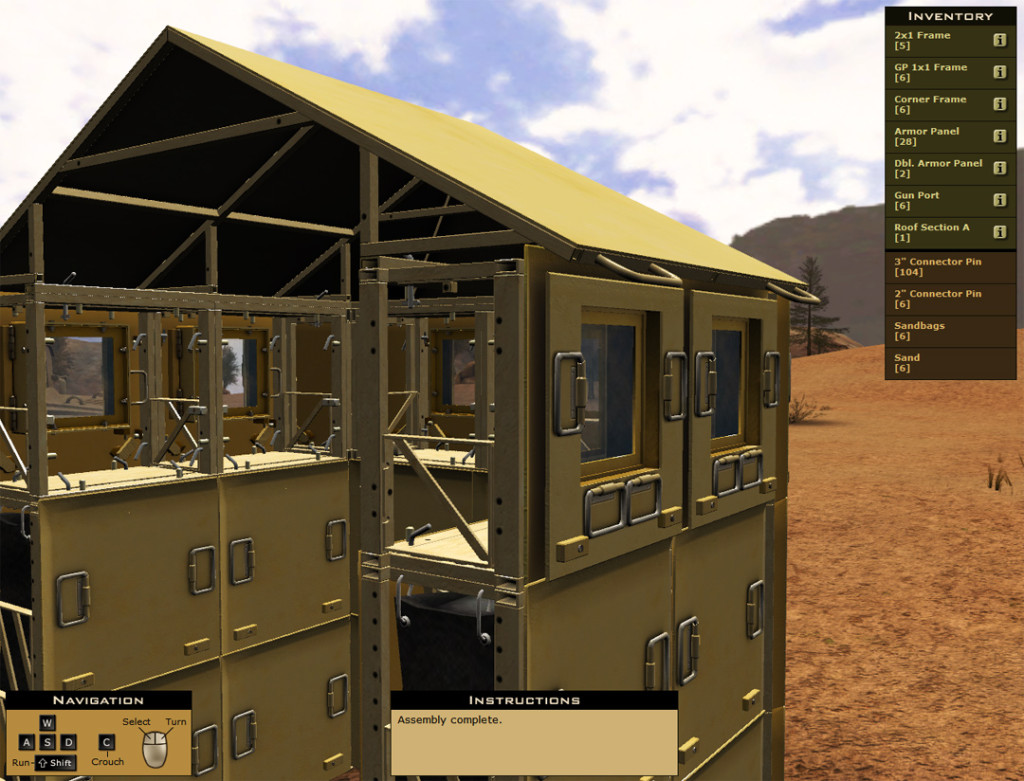 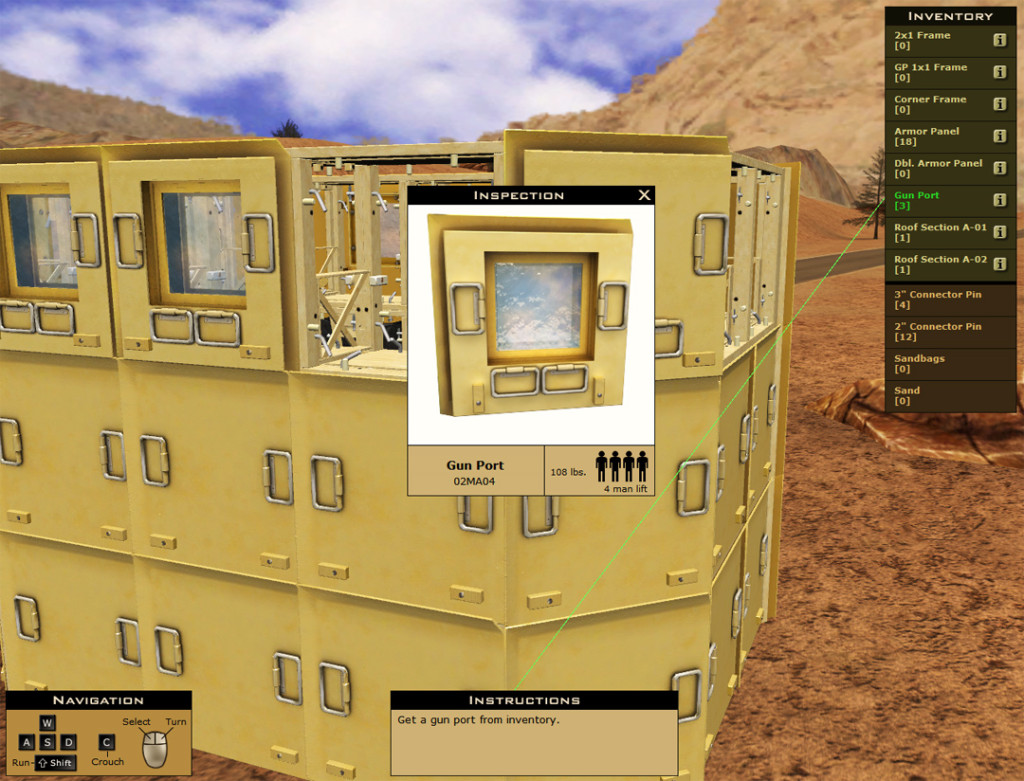 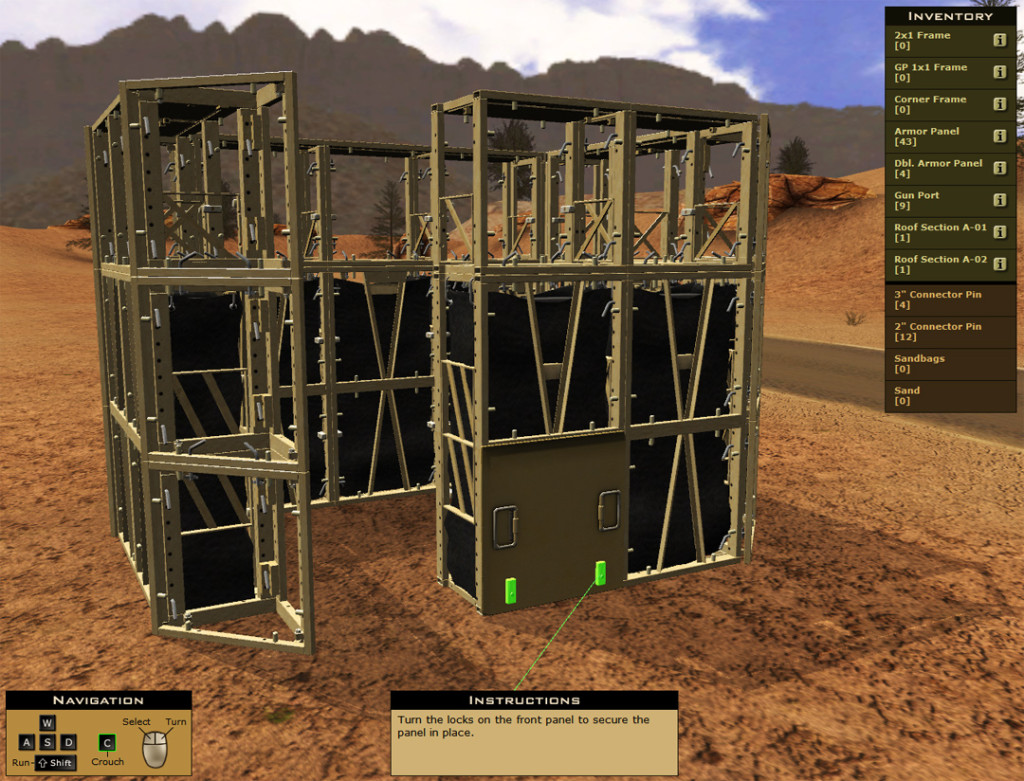 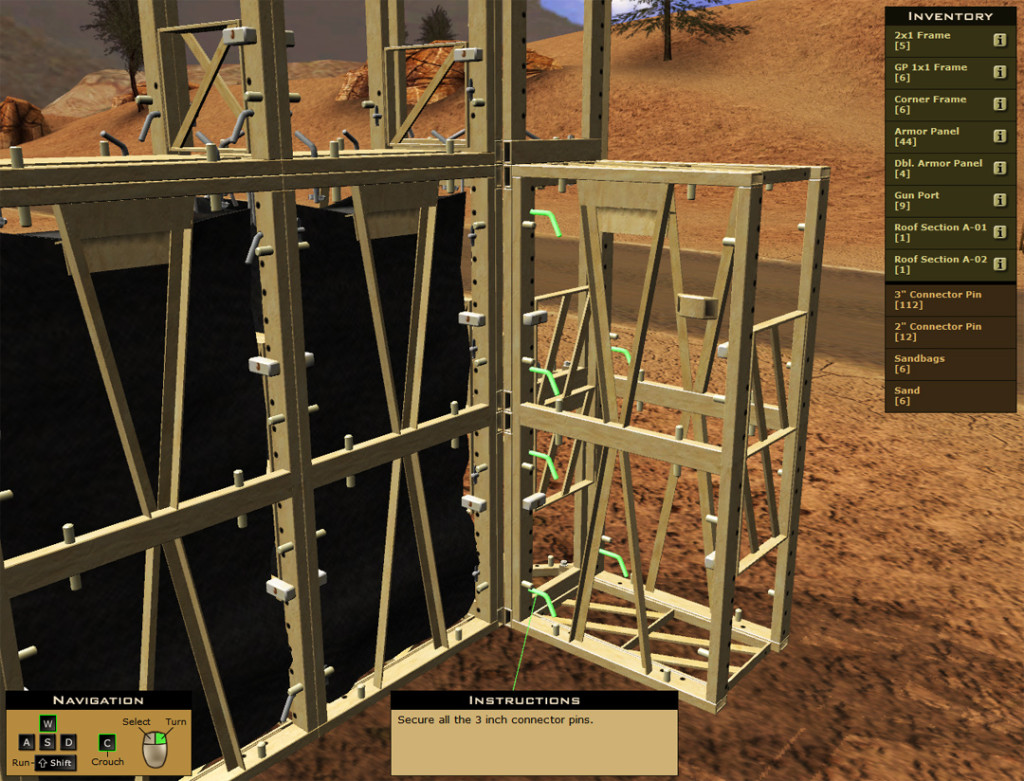 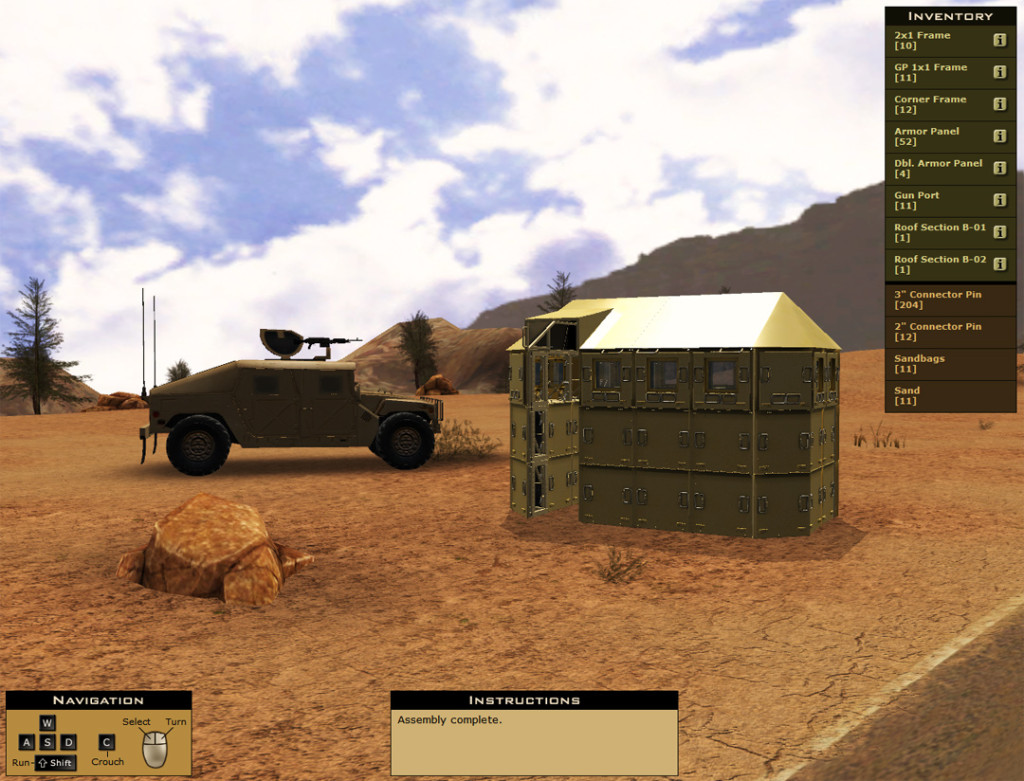 If you’re charged with training people to assemble mission critical equipment, you’re aware of the challenges associated with conducting training on real-world equipment. Interactive 3D training simulators allow you to provide your operators with a safe and cost effective training solution. For an assessment of needs that are specific to your project, please contact us so we can review your requirements and put forward a project plan, including a technology recommendation.